Once the dust cleared, it turned out that one of the enduring lessons from the past week occurred at about 22,000 feet.

The Iranian downing of an RQ-4A Global Hawk on Thursday is thought to have been the first time one of the Pentagon’s surveillance workhorses has been shot out of the sky. Aside from the fact the incident nearly risked taking the United States and Iran to war for a few hours, it was also stark evidence of an escalation in Tehran’s military capabilities.
“They work,” said Jeremy Binnie, Middle East and North Africa editor at Jane’s Defence Weekly, of Iran’s air defenses. The incident “highlights that when the Iranians really make investment, it can really count,” he told CNN.
“We knew that with ballistic missiles, but it appears the case with air defenses too.” 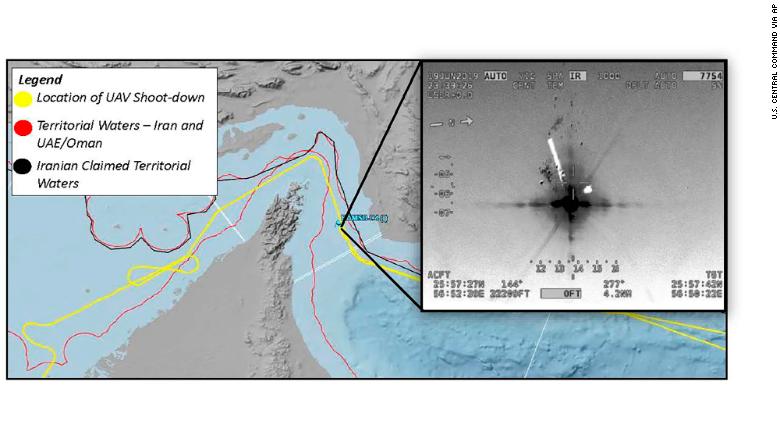 This image released by the U.S. military’s Central Command shows what it describes as the flight path and the site where Iran shot down a US drone in the Strait of Hormuz on Thursday, June 20, 2019.
The RQ-4A isn’t a clay pigeon. At $110 million each, the Global Hawk needs three people to remotely pilot it and its sensors. Wider in wingspan than a Boeing 737, it has a Rolls Royce engine moving it along at around 500 miles per hour as it hoovers up signals and images normally at 65,000 feet to keep out of the way of surface-to-air missiles. Even if they get too close, it has a radar-warning receiver, a jamming system and releases a decoy, towed behind it.
But its destruction is a sign of Iran’s quiet focus. Binnie pointed out the size of the aircraft makes it “not a tough target in that respect”, he said. “A few years ago this would have been a surprise, but now their new air defense gear looks a lot more impressive.”
While America’s military is by no means threatened in the long term by Iran, instances like the downing of the drone show that Tehran can sometimes have an outsized effect with narrowly-focused efforts, and is an adversary certainly capable of keeping its opponents off balance. The US would win any conventional conflict in the short term, but should be wary that Iranian ingenuity (or deviousness, if you’re in Washington) will stop any conflict from being a “cakewalk.”
Despite the dispute over precisely where it happened, there’s no doubt the Iranian Revolutionary Guard Corps managed to destroy one at 4:05 a.m. on June 19. The US military has released video to support its claim that it happened 34 kilometers from the nearest Iranian land mass, and showed a flight path that suggests the spy drone never entered Iranian territory. Conversely, Iranian Foreign Minister Javid Zarif tweeted coordinates for the attack that put it well inside Iranian territory — near the city of Kouh-e Mobarak.
The IRGC said it used a “3rd of Khordad” surface-to-air missile system, images of which have been circulating now on social media as a symbol of Iranian prowess against the staggering unmanned technology the Americans unleash in the stratosphere every day.
The Khordad 3 was first unveiled in 2014, has a range of up to 75 kilometers, and can hit as far up as 30 kilometers, Iranian state-backed media has said. Janes concluded the strike was likely from a mobile vehicle, given the US contention the missile was launched from 70 kilometers away, and there is no Iranian facility matching that location. In short: Tehran took out a US spy drone from the back of a fancy truck.
While the US has massively improved its drone fleet since the Global Hawk first came to the Navy 13 years ago, with the MQ-4C Triton about to join service, Iran also has more advanced missiles than the one that took down the drone last week.
Ten days before the incident, Iran unveiled an upgrade which has nearly double the range and is also homegrown — the product of a series of reverse-engineering feats and technology purloined over the years by the sanctions-strapped country.
Binnie said the Iranians had either bought or developed radar technology that had helped them improve targeting at a distance. “We do not really understand how these guidance systems are working,” he said.
Binnie added that the angle of attack of the missile seemed to suggest it had approached the drone from the west, rather than chasing it from behind, suggesting it may have been relatively efficiently guided towards the drone by its launcher.
This isn’t the first time Iran has hit US technology. It took down a RQ-170 stealth drone in 2011 and reportedly reverse-engineered it to create its own variants from the wreckage.
There didn’t appear to be much left of the RQ-4A to pore over, but the interception at 22,000 feet belies a nation, in the words of President Trump, “going through hell.”
It was just one very expensive pilotless drone, but its downing nearly took the US to war in the region yet again, exposing just how important these flashes of the unexpected are.
Post Views: 663

Qatar: A Testament to Saudi Weakness