Despite taking numerous administrative measures and devaluing currency by close to 15%, Pakistan booked its highest trade deficit in history in the recently-ended fiscal year, as authorities and PML-N government miserably failed to increase exports and contain the import bill.

The gap between exports and imports weighed heavily on the country’s external sector and pulled official gross foreign currency reserves down to a single digit. The deficit not only broke the year old record but also surpassed the government’s own revised estimate.

“During fiscal year 2017-18, trade deficit stood at $37.7 billion, which was 16% or $5.2 billion more than the comparative period of the previous year,” the Pakistan Bureau of Statistics (PBS) announced on Wednesday.

The last government of the PML-N had projected to limit the deficit to $25.7 billion. In April, it revised the estimates to $29.4 billion. However, the final trade gap was $12 billion higher than the original estimates of the Ministry of Finance, highlighting its severe capacity constraints.

The fresh statistics have deepened concerns about long-term sustainability of the external sector, which the last government maintained by borrowing from foreign countries and commercial banks. The results suggest that another bailout programme from the International Monetary Fund is now just a matter of time. 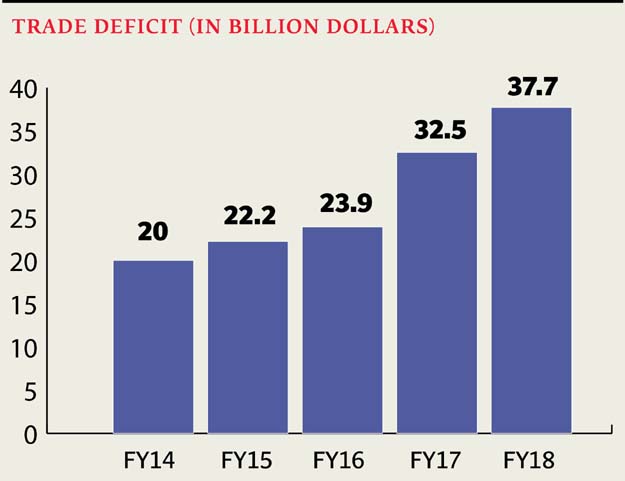 According to experts, cheap imports from China have also started to hurt import-substitution industries.

Owing to the swelling trade deficit, the country’s balance of payments is now projected to worsen to levels never anticipated by the finance ministry.

Former finance minister Ishaq Dar is being blamed for this poor economic show. Caretaker Finance Minister Dr Shamshad Akhtar on Wednesday blamed the weak economic management for a 15-year high debt level of 72% of the GDP. The financing of the current account deficit by taking more loans was also one of the reasons for high debt accumulation.

Exports increased 13.7% to $23.2 billion in last fiscal year, which were $2.8 billion higher than the comparative period of the preceding year. But an increase of $2.8 billion in exports in the year was not even sufficient to finance a month’s trade deficit that remained above $3.8 billion. Exports remained below the revised estimates of $24.9 billion.

In comparison, the import bill widened 15.1% to $60.9 billion in last fiscal year. It was the highest ever import bill that Pakistan paid in a single year since its creation.

In absolute terms, imports were $8 billion higher than the preceding year.

The devaluation could not contain the import bill but it added Rs1.190 trillion in public debt, according to Director General Debt Office’s statistics.

The U.S. Needs to Talk to the Taliban in Afghanistan