Pakistan’s capacity to repay external debt and liabilities has weakened significantly in the past four years and its foreign debt obligations are now equal to 162% of annual foreign exchange earnings – the highest ratio in the past one decade, said Dr Ishrat Husain, a former central bank governor.

The capacity to service external debt was weakening and that should have given sleepless nights by now to the State Bank of Pakistan (SBP), remarked Husain while speaking at the fourth National Debt Conference, organised by the Policy Research Institute of Market Economy (PRIME).

Responding to a question, Husain suggested that the external debt and liabilities as a percentage of foreign exchange earnings should have been on a downward trajectory, which might have demonstrated some policy measures.

The biggest setback was the decline in export earnings, which set off alarm bells, said the former central banker. In 2013, the external debt and liabilities were equal to 193.2% of exports – a ratio that within four years has jumped to 304.6%.

He said the rapid depletion of foreign currency reserves had created some serious concerns and the country’s import cover now stood below the three-month level. 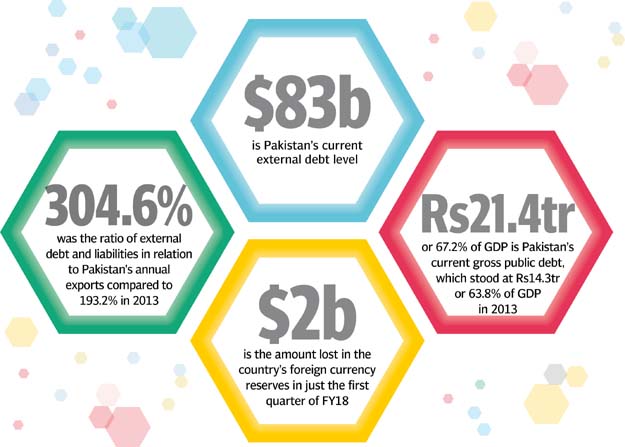 In 2013, when the PML-N government came to power, the gross public debt stood at Rs14.3 trillion or 63.8% of gross domestic product (GDP). In just four years, it has grown to Rs21.4 trillion or 67.2% of GDP. However, the major concern was the external debt.

Husain suggested the need for proactive management of the external account at least till June 2018 and that the external debt of $83 billion should not be seen in isolation.

Initial conditions on the external and fiscal fronts indicated the gathering of another storm, said Dr Waqar Masood Khan, who earlier this year retired as finance secretary.

He underlined the need for consistency in economic policies, hoping  for a leadership that would make policy consistency its hallmark.

The government lost all economic gains of the first three years of its government in the fourth year, remarked Khan. Trends suggested that budget deficit by the end of current fiscal year would be even higher than 5.8% of GDP recorded in the previous fiscal year, he added.

Khan said Pakistan lost $2 billion of reserves in just the first quarter of the current fiscal year, which was very worrisome. He called for taking immediate policy actions to arrest the downward slide in the reserves.

“How can we use the precious official foreign currency reserves that have been built by taking some difficult steps for simply defending the exchange rate,” questioned the former finance secretary.

“We may pass this fiscal year by somehow managing the external account, but in this process we may shake the confidence of people in the economy,” said the former finance secretary.

He anticipated that the current account deficit would cross $16 billion in the current fiscal year, which was $6 billion higher than official estimates. “All solvency indicators of the external debt have worsened in 2017,” said Dr Vaqar Ahmad, Deputy Executive Director of Sustainable Development Policy Institute (SDPI).

Ahmad pointed out that most of the short-term external borrowings were secured at the floating exchange rate which could be a big source of vulnerability due to any fluctuation in interest rates. He stressed that the debt management strategy should be strengthened.

Fiscal blowout in the making