Ownership of consumer durables like computers, home appliances and vehicles is often seen as an important indicator of the size and health of the middle classes in emerging economies. Examples of periodic household surveys used by researchers to measure such data include NSS (National Sampling Survey) in India and PSLM (Pakistan Social and Living Standards Measurement) in Pakistan.

Dr. Jawaid Abdul Ghani, a professor at Karachi School of Business Leadership, has recently analyzed household surveys in India and Pakistan to discover the following:

1.  As of 2015, car ownership in both India and Pakistan is about the same at 6% of households owning a car. However, 41% of Pakistani household own motorcycles, several points higher than India’s 32%.

2. 12% of Pakistani households own a computer, slightly higher than 11% in India.

4. 71% of Indian households own televisions versus 62% in Pakistan. 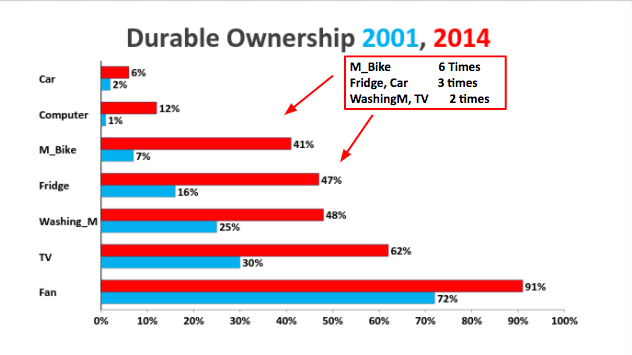 Dr. Abdul Ghani has also analyzed household data to show that the percentage of Pakistani households owning washing machines has doubled while car and refrigerator ownership has tripled and motorcycle ownership jumped 6-fold from 2001 to 2014. 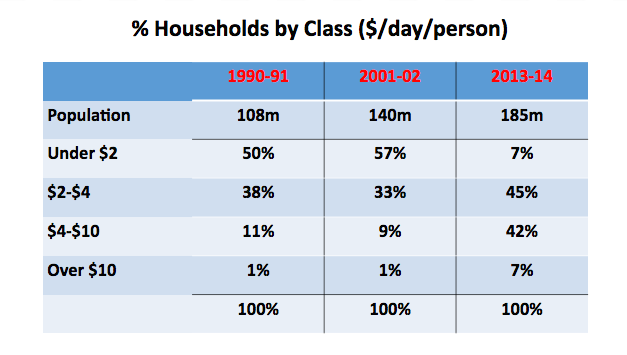 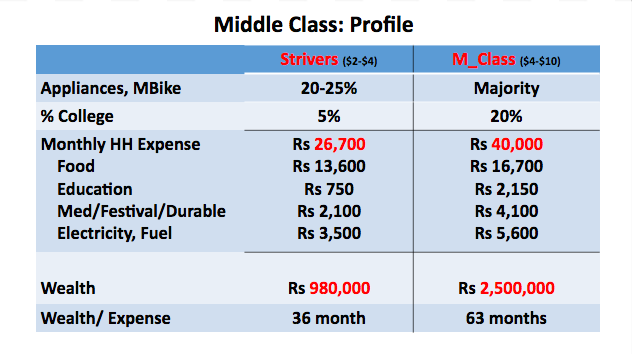 Average Pakistani adult is 20% richer than an average Indian adult and the median wealth of a Pakistani adult is 120% higher than that of his or her Indian counterpart, according to Credit Suisse Wealth Report 2016. Average household wealth in Pakistan has grown 2.1% while it has declined 0.8% in India since the end of last year.

Pakistan’s GDP calculated from consumption data in PSLM is significantly higher than the government estimates based on production data. The reverse is true of Indian GDP.

M. Ali Kemal and Ahmed Waqar Qasim, economists at Pakistan Institute of Development Economics (PIDE),  explored several published different approaches for sizing Pakistan’s underground economy and settled on a combination of  PSLM (Pakistan Social and Living Standards Measurement) consumption data  and mis-invoicing of exports and imports to conclude that the country’s “informal economy was 91% of the formal economy in 2007-08”.

Here’s a quote from French economist Thomas Piketty’s book “Capital in the Twenty-First Century” explaining his skepticism of production-based official GDP figures of India and China:

“Note, too, that the very high official growth figures for developing countries (especially India and China) over the past few decades are based almost exclusively on production statistics. If one tries to measure income growth by using household survey data, it is often quite difficult to identify the reported rates of macroeconomic growth: Indian and Chinese incomes are certainly increasing rapidly, but not as rapidly as one would infer from official growth statistics. This paradox-sometimes referred to as the “black hole” of growth-is obviously problematic. It may be due to the overestimation of the growth of output (there are many bureaucratic incentives for doing so), or perhaps the underestimation of income growth (household have their own flaws)), or most likely both. In particular, the missing income may be explained by the possibility that a disproportionate share of the growth in output has gone to the most highly remunerated individuals, whose incomes are not always captured in the tax data.”

Who is Dr. Jawaid Abdul Ghani?

The PSLM household data cited in this blog post is taken from a recent presentation made by Dr. Jawaid Abdul Ghani at the Karachi School of Business and Leadership (KSBL) where he teaches. KSBL has been established in collaboration with  Cambridge University’s Judge Business School. Prior to his current faculty position, Dr. Abdul Ghani taught at MIT’s Sloane School of Management and Lahore University of Management Sciences (LUMS). He has a computer science degree from MIT and an MBA from Wharton Business School.

Pakistan has managed to significantly reduce poverty and rapidly grow its middle class since 2001 in spite of major political, security and economic challenges. The foundation for the rise of the middle class was laid on President Musharraf’s watch by his government’s decisions to invest in education and infrastructure projects that led to the expansion of both human and financial capital. My hope is that the continued improvement in security situation and implementation of China-Pakistan Economic Corridor (CPEC) related projects will bring in higher long-term investments and accelerate Pakistan’s progress toward prosperity for all of its citizens.