Pakistan’s debt in terms of the size of economy is expected to increase further, said the country’s top debt manager on Thursday, as the finance ministry estimates external public debt repayments at a whopping $31 billion in the next seven years.

The $31-billion public external debt repayments from July 2019 to June 2026 have been worked out on the basis of $74 billion external public debt as of end-February 2019. The debt that Pakistan will contract in the next eight years including from the International Monetary Fund (IMF) is not part of these internal estimates of the finance ministry.

The IMF’s previous loans are also not part of these repayments, which are booked on the balance sheet of the State Bank of Pakistan (SBP).

In the near future, the total public debt as a percentage of gross domestic product is expected to increase further, said Abdul Rehman Warraich, Director General Debt Office of the Ministry of Finance, while giving a briefing to the National Assembly Standing Committee on Finance.
Warraich said as of March 2019, Pakistan’s public debt stood at Rs28.6 trillion, which was equal to 74.5% of GDP. He hoped that the ratio would slide down to around 65% after five years, subject to improvement in current macroeconomic conditions.
Even the 65% debt-to-GDP ratio will be higher than the statutory limit of 60% set by parliament in the Fiscal Responsibility and Debt Limitation Act. The last two governments as well as the current Pakistan Tehreek-e-Insaf (PTI) government are in breach of this limit.
It was the last meeting that Faizullah chaired as chairman of the standing committee. He has been asked to vacate the position for former finance minister Asad Umar. Committee members highly appreciated the services of Faizullah. 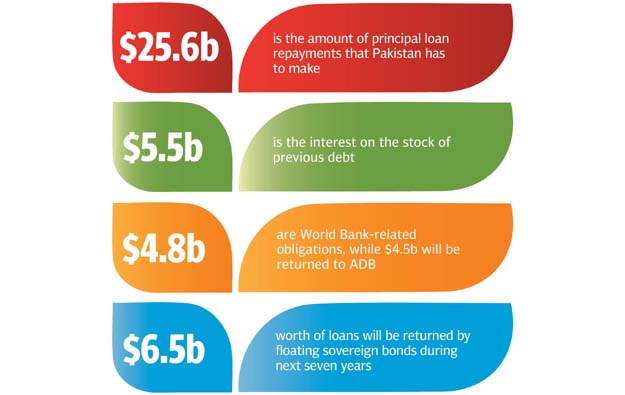 Prime Minister Imran Khan has changed his entire economic team. The standing committee directed the government to explain the reasons for appointing Dr Reza Baqir as the SBP governor and Shabbar Zaidi as the Federal Board of Revenue (FBR) chairman in the next meeting.

The committee members did not endorse the DG Debt estimates of reduction in the debt burden in terms of the size of national economy. They also showed their frustration with the finance ministry’s decision not to share projections of external debt repayments over the next 10 years with parliament.

The external debt repayments for the next 10 years had not been finalised yet due to ongoing negotiations with the International Monetary Fund (IMF), said Umar Hameed, Special Secretary Ministry of Finance. Hameed sought an in-camera meeting to share the future debt trajectory of the country.

Pakistan Muslim League-Nawaz (PML-N) MNA Ali Pervaiz Malik questioned the prime minister’s claim that the PML-N had left behind Rs30 trillion in debt as of end-June 2018. He urged the finance ministry to share the Rs28.6-trillion public debt figure as of end-March 2019 with Prime Minister Imran Khan, so he may stop giving inaccurate figures.

An internal assessment of the finance ministry showed that the government would repay $31.1 billion of external public debt in the next seven years. This includes $25.6 billion in principal loan repayments and $5.5 billion in interest payment on previous debt.

The maximum amount of $10 billion or nearly one-third would be returned to multilateral lenders, excluding the IMF, showed the official statistics. Out of this, the World Bank-related obligations are $4.8 billion and the Asian Development Bank will be returned $4.5 billion.

Pakistan will repay $6.5 billion worth of loans contracted by floating sovereign bonds over the next seven years, including $2 billion in interest on these bonds. The bonds-related debt obligations are equal to 21% of the total external public debt repayments. The DG debt told the standing committee that Pakistan was going to launch a bond programme and its future borrowings would largely comprise those bonds. He said the government was now aiming to rely on long-term debt instruments instead of heavily borrowing from foreign commercial banks.

From 2019 to 2026, Pakistan will also repay $5.4 billion worth of foreign commercial loans, largely taken from China. Out of the $5.4 billion, an amount of $4.5 billion will be returned to three Chinese commercial banks, according to sources in the external wing of the Ministry of Finance.

Pakistan will return $5.9 billion to members of the Paris Club in the next eight years. The maximum loan of $2.5 billion will be repaid to Japan, followed by $1.2-billion repayment to France.  The country will also return nearly $3 billion to non-Paris Club members, mainly China, in the next seven years.

Owing to the low non-debt creating inflows, there is a strong likelihood that majority of these loans will be repaid by contracting new loans. Due to its growing debt burden, Pakistan is categorised as debt-distress country.

Warriach said the pace of accumulation of public debt was expected to slow down under the IMF programme. He was of the view that the high interest rate era was likely to end soon and there would be steep fiscal adjustments in coming years, which would help contain the public debt.

The DG debt also said under the IMF programme, the expenditures would be curtailed and there would be a significant increase in taxes. Pakistan could be in serious trouble due to the high refinancing risks attached with the public debt, said MNA Ali Pervaiz.

Economy: villains of the piece