By George Friedman
Iran’s influence has spread across the Middle East, and the U.S. is pushing back.

The United States has announced that it is deploying a carrier battle group and a bomber group to the Middle East. The reason given is that U.S. intelligence has detected an Iranian threat against U.S. and allied assets in the region. The United States has stated that it does not want war with Iran but is prepared to defend its interests in the region. It’s not clear what threat the U.S. detected, but since this force will take some time to reach the area, we can assume that the threat is not perceived to be imminent. And we will assume that the type of threat the U.S. believes is posed by Iran can be countered by the type and amount of air power deployed. But as with all such deployments, there are military, psychological and political components that must be understood.

Fallout From the U.S. Drawdown

Since the Obama administration, Washington’s strategy has been to recognize that the United States’ massive interventions in the Middle East failed to achieve their political goals but imposed substantial costs on the U.S. military and unbalanced the U.S. global posture. They may have disrupted al-Qaida but did not create effective regimes that could themselves suppress jihadist groups. The deployments were neither achieving their goal nor supporting U.S. strategies. Washington understood that withdrawing U.S. forces from the region would have political consequences but concluded that the threat posed by these consequences was acceptable.

The drawdown in U.S. forces redefined regional dynamics. The underlying strategic issue in the region has been the relationship between the Arab world, surrounding non-Arab states like Israel, Turkey and Iran, and great powers, like the United Kingdom and the United States. With the U.S. drawdown, the latter became less significant, while the relationships among the Arab and regional non-Arab powers became critical. At the time, the greatest threat came from Iran. For Iran, the Arab world was a historic threat but one that presented an immediate opportunity. 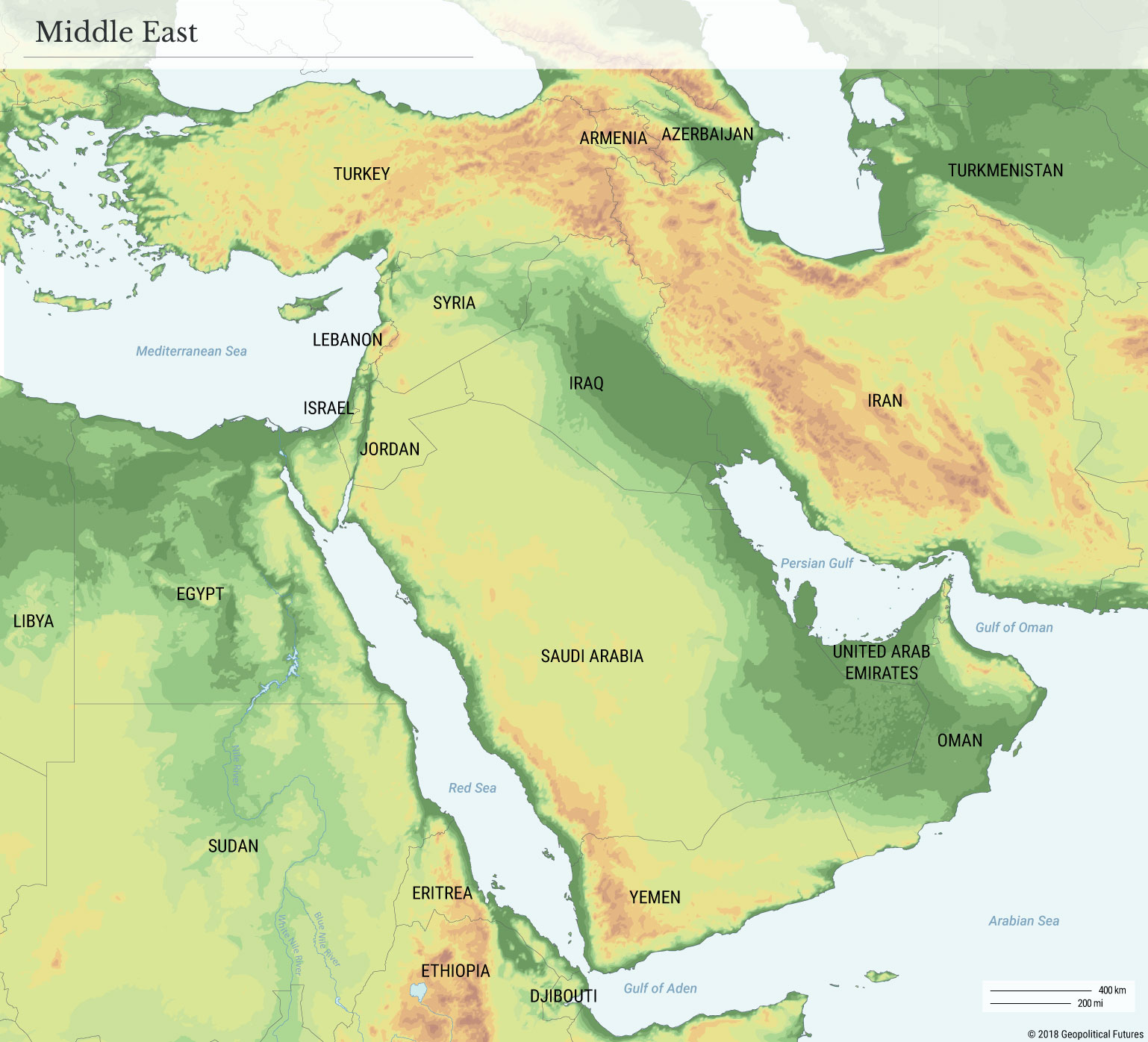 The threat and opportunity coalesced in the rise of the Islamic State, which occurred in parallel with the slow drawdown of U.S. forces. Shiite-majority Iran saw the radical Islamic, Sunni and Arab force as a threat to its interests, and particularly to its historic interest in Iraq (of which the nearly decadelong war in the 1980s was just one manifestation). Tehran could not tolerate a jihadist government in Baghdad, so it intervened, organizing and leading the Iraqi army. Ironically, at that point, Iranian and American interests coincided; both simply wanted to break the Islamic State. Once IS was broken, the U.S. continued its drawdown in Iraq while Iran became an increasingly dominant political factor in an Arab country with a large Shiite population.

This created a much larger and historic opportunity for Iran. Iran’s strategy was to exploit the Arab world’s Sunni-Shiite divide, using its commonality with Shiites to challenge Sunni Arab powers – especially Saudi Arabia. In Lebanon, Iran had already established a powerful position through Hezbollah, a Shiite Arab force, and it saw another opportunity in Syria. While the Alawite regime of President Bashar Assad was secular, the Alawites are a Shiite sect with historical ties to Iran. During Syria’s civil war, Iran intensified its support of the Assad regime and aligned with the Russian intervention. Tehran and Moscow had a common interest in weakening U.S. power in the region and a shared strategy of using the U.S. drawdown to do so. Iran and Russia were historical antagonists, but both had an overriding interest to weaken the United States, psychologically if not in actual global power.

Iran has therefore emerged as a major regional force. It is a dominant power in Iraq and Lebanon, a significant force in Syria and is deeply engaged in the war in Yemen. It is in the process of surrounding Saudi Arabia, a country with which it has fought wars going back to the 1960s; indeed, in many ways, the Saudi-Iranian enmity is the foundation of regional dynamics. In the past, as during Iraq’s invasion of Kuwait, U.S. strategy would be to use main force to block Iran. But the new American strategy has been careful to limit American exposure. Therefore, the U.S. now wants to rely on regional powers to act when it is in their interests to do so, rather than to take direct action itself.

The result has been the emergence of an Israeli-Saudi coalition that includes nations on the Persian Gulf’s western coast. This force is dangerous to Iran. Iran has power around Saudi Arabia, but it is what might be called thin power. With the exception of Lebanon, its power in other countries is neither deeply rooted nor indestructible; rather, it is spread dangerously wide and shallow. And the cooperation that has emerged between Israel and Arab, anti-Iran powers is substantial. In addition to the political power being exerted on Iran, it’s under pressure from the economic sanctions put in place by the United States putatively because of Iran’s nuclear program. In reality, the sanctions fit into the U.S. strategy of reducing military exposure while using diplomatic and economic means to exert pressure. Iran, whose economy had been getting weaker on its own, has been significantly affected by U.S. economic actions.

Iran’s expansion has come under significant pressure. The Israelis have been attacking Iranian positions in Syria, and Russia – ostensibly Iran’s ally but one that’s not eager to see a powerful Iran in the Caucasus – has not made any attempt to stop them. Pressure in Yemen has also placed Iran in a difficult position. Iran remains influential in Iraq, but everywhere else, its expansion has run into serious problems.

Still, Iran has countered where it can. Tehran has been supplying Hamas for some time, but the relationship between the Sunni and Shiite entities has been necessarily complex. (Though Hamas still managed a significant rocket attack on Israel this weekend.) One of Iran’s political options is to draw Israel into attacks on Gaza and Lebanon and portray itself as the only major power in the Muslim world challenging Israel while many others are effectively allied with Israel. The problem with that strategy is that it could also energize jihadists, and they are not Iran’s friends.

Therefore, Iran has to either fold some of its cards or somehow strike. The U.S. has warned that an attack against its allies is possible. The issue now for the U.S. is that, given Iran’s economic problems and the broad but weak hold it has in the region, the drawdown of U.S. forces makes it less risky for Iran to take action. At the same time, reinserting large numbers of ground forces is not something the U.S. wants to do.

Instead, we see the deployment of U.S. air power in the form of a carrier battle group and land-based powers. The U.S. is positioning itself so that, if Iran carries out some operation to stabilize its position, the U.S. can respond with airstrikes. The problem is that, in Syria and Lebanon, Israel is capable of managing air power, and strikes in Iraq will find few targets worthy of the force. What the United States has threatened, without making any explicit threats, is airstrikes on Iran itself if it carries out operations against U.S. allies. But the force the U.S. is deploying is not large enough for a sustained air campaign. So, the threat it’s making at this time is one of limited air action, with further action readily available.

The U.S. deployment is a test of two things. First, whether air power is a significant enough threat to force the Iranians to refrain from aggressive actions in the region. Second, whether it is enough to reverse the Iranian expansion. Iran is embroiled in domestic issues, and the Iranian public, rather than rallying to the flag, might see American airstrikes as yet another miscalculation by the Iranian government. I certainly don’t know which it will be, nor do I think the U.S. government knows. But I suspect that the Iranian government doesn’t know for sure either, and that might limit their risk-taking.

Behind all this is the fact that the U.S. intervention in the region ultimately failed to achieve its political goals and led to the drawdown of the U.S. main force, leaving only limited forces pursuing very limited ends. Without a global power imposing force, the region rearranged itself, as the U.S. had hoped it would, but the rearrangement put Iran in a powerful position, which the U.S. certainly didn’t want. Anticipating that Iran will try to strike against the new anti-Iran coalition, the U.S. is trying to reassert its power without redeploying ground forces. In the end, the Israelis, the Saudis and the (hitherto unmentioned) Turks have more at stake than the U.S. and therefore need to take the risks, either way.